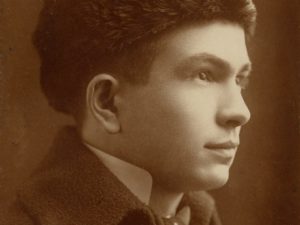 “Paul van Ostaijen led an eventful life, with his political ideals seeing him flee from Antwerp to Germany during the First World War. Some of his poetry – and the distinctive typography that was integral to it – has now been translated into English.” Zo begint Bjorn Gabriels’ bespreking van Occupied City de Engelse vertaling van Bezette stad op Flanders Today.

“I was impressed, intrigued, and embarrassed not to have heard of the book before,” zegt Croft over zijn ontdekking van Bezette stad. “To me it’s one of the very great literary responses to the 1914-18 war, as important as works by Henri Barbusse, Jaroslav Hašek or Wilfred Owen. It is certainly a lot more interesting than TS Eliot’s The Wasteland, which British readers imagine represents the high-point of post-1914 European literature.”